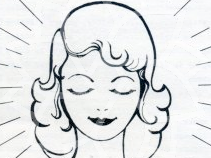 As you can read about over at The Hairpin (which I could not be more excited about!), I was sent to Christian charm class as a kid – it was required for girls at the fundamentalist school I attended. Studying the Bible was no longer enough. Now we needed to look good doing it.

The pink-covered workbook we studied, which is an entirely real thing that definitely exists on the physical plane and is still in my possession, is like a 1950s home economics textbook meets the apocalypse. It combines Bible verses and prayers with instructions about beauty and poise. The back of the manual proclaims that it “guarantees HEIGHTENED LOVELINESS” and “exalts TRUE FEMININITY.” What it’s really about is control. Behold religion’s most ludicrous submissiveness propaganda to date. 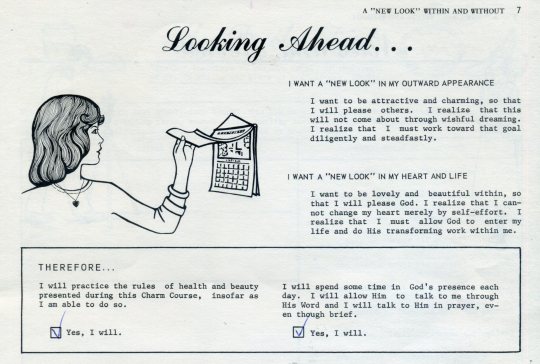 Get pretty saved. That’s get saved and get pretty. On one page, the prayer of confession. On the next, the prayers of beauty. Sure, you’ve heard of taking a vow of poverty, but how about a vow of beauty? The previous page states that committing to Christ is “an important first step in the development of inner beauty. When a girl’s heart has found peace with God, harsh tension lines relax … a lovely new radiance and glow … shines through from within…”

This lesson reminds me of the scripture in which Jesus exhorted his disciples to give away their goods to the poor, except for their face creams, stating that they would “yea verily” need them later for the Apostles Who Glow talent contest. Wait, no, that didn’t happen. But it does call to mind his promise to give “extra loaves and fishes” to those who were attractive. Oh, no, that didn’t happen either. 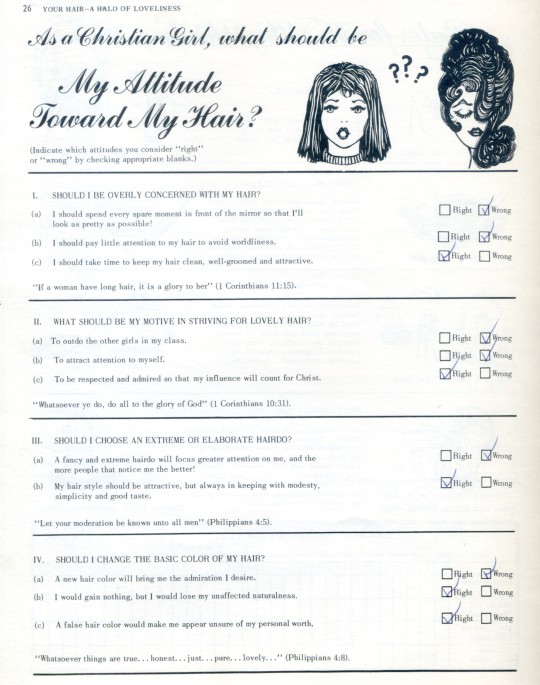 Holy approval is only a visit to a beautician away! This lesson reveals answers to one of the great spiritual mysteries debated through the ages, in the tried-and-true quiz method of the theologians at Cosmo. Styling hair in an attractively submissive fashion is an overlooked technique by fashion magazines these days. One’s bangs must be compliant, one’s length must be meek, one’s ponytail must be modest but not faint-hearted. The book also advises that hair dye might make you appear to be unsure of your personal worth. Ah, there’s the catch. Whether you really feel worthy isn’t the point; it’s whether you appear to feel worthy that matters. 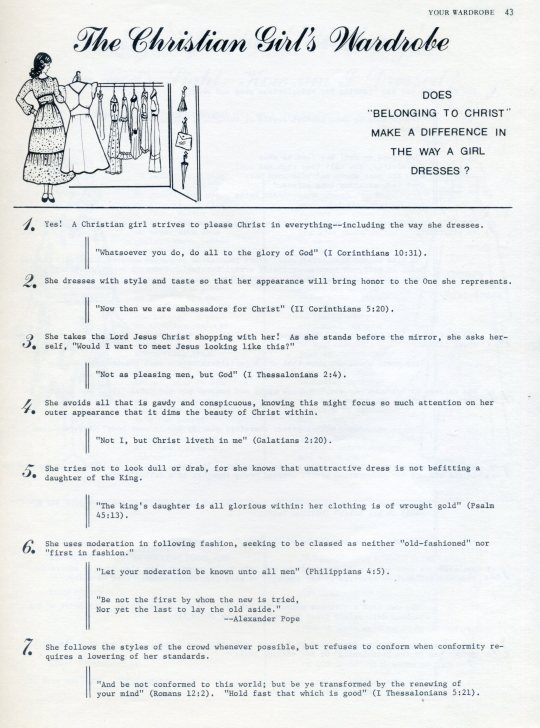 Stay somewhere between dull and gaudy. Because if you shine too bright, you might dim the light of God. I’ll give you the secret code for making sense of these teachings. Replace the words “God” and “Jesus” with “your pesky local patriarchal church leader.” Then it makes sense, no matter what century you’re in. This page also advises to follow the crowd “whenever possible.” You’re not to do your own thing, explore your own style, develop your own ideas or arrive at your own conclusions. You’re to conform. Shine, but just a little, so that you meet expectations and make your pesky local patriarchal church leader look good. 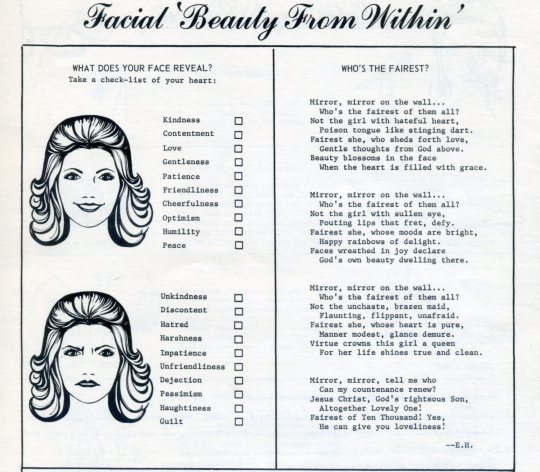 Be ye afraid and delightful. Just when you were thinking the Christian Charm Manual only offers instructions and illustrations, we get to some poetry. Literature to the rescue! According to the poem, sometimes girls can be a little brazen. Sometimes they forget to be afraid. Sometimes they lack the bright moods that Jesus requires. (Side note: Jesus wasn’t necessarily known for being chipper all the time.) Girls are either “happy rainbows of delight,” or they’re pouting and defying someone. It’s all rather black and white, despite the colorful imagery. It’s enough to make a sane person turn against rainbows. If we’d done more poem-explicating and less people-pleasing in charm class, we might have seen that the instructions seem emotionally impossible: to be joyful and “not unafraid.” But by learning to smile while afraid, we’ve also learned a valuable lesson about hiding our emotions under a facade. 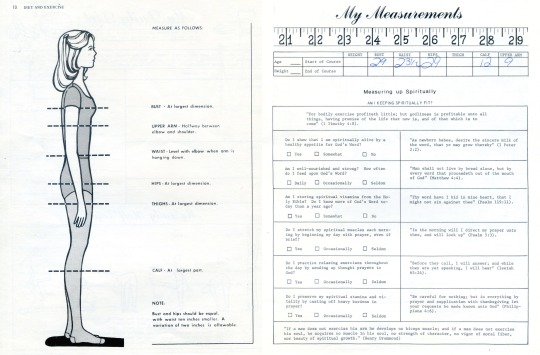 Measure without ceasing. Another page includes instructions about how to accurately measure your bust, waist and hips. A handy note amidst the scriptures advises, “Bust and hips should be equal, with waist ten inches smaller. A variation of two inches is allowable.” So Jesus – or, rather, your pesky local patriarchal church leader – wants us to be pinup girls? Now we know. It’s this kind of thinking that led the early church fathers to invent the story about Mary Magdalene being a prostitute. We’re to be as meek as Mary the mother of Jesus and as alluring as Mary the mythical hooker. Those are your two female archetypes as a young Protestant girl, so knock yourself out. (But don’t get yourself knocked up.) 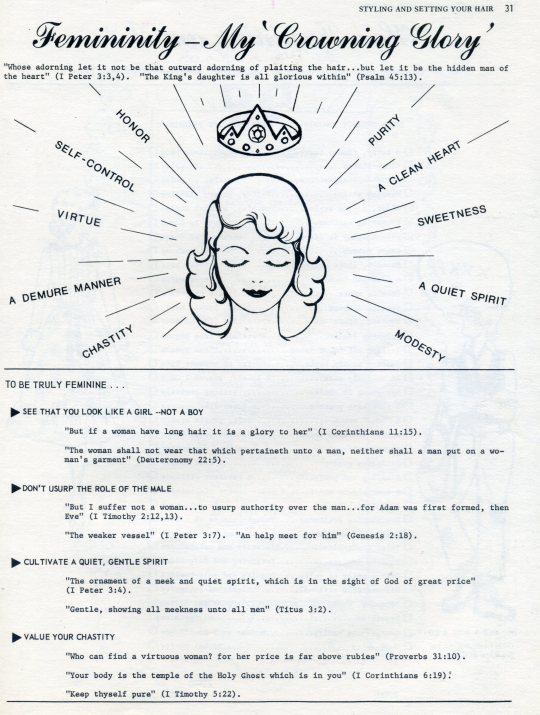 Usurpers, Unite! Another lesson commands more dramatically in all caps, “DON’T USURP THE ROLE OF THE MALE,” followed by a reference to females as “the weaker vessel,” immediately after strongly recommending long hair. But also, let not your outward adorning – which, don’t get me wrong, is a totally required and very important part of pleasing God – become so important that you forget about your inner glory. Do it and do it right, but also do it only in the right amount. Don’t make a thing about it.

Lots of girls receive these basic lessons one way or another. And after all those crazy rules, we come to the most important one: The last rule of charm class is talk about charm class. It’s how you undo the programming, expose the ostensibly helpful tips as destructive and work the residual gunk from your system. That’s one way to earn your Charm School Dropout merit badge (what?! get one now – they’re free), and that’s something your pesky local patriarchal leader (church-based or otherwise) won’t see coming.

*No offense to the actual Jesus intended. Jesus is not a registered trademark of organized religion.