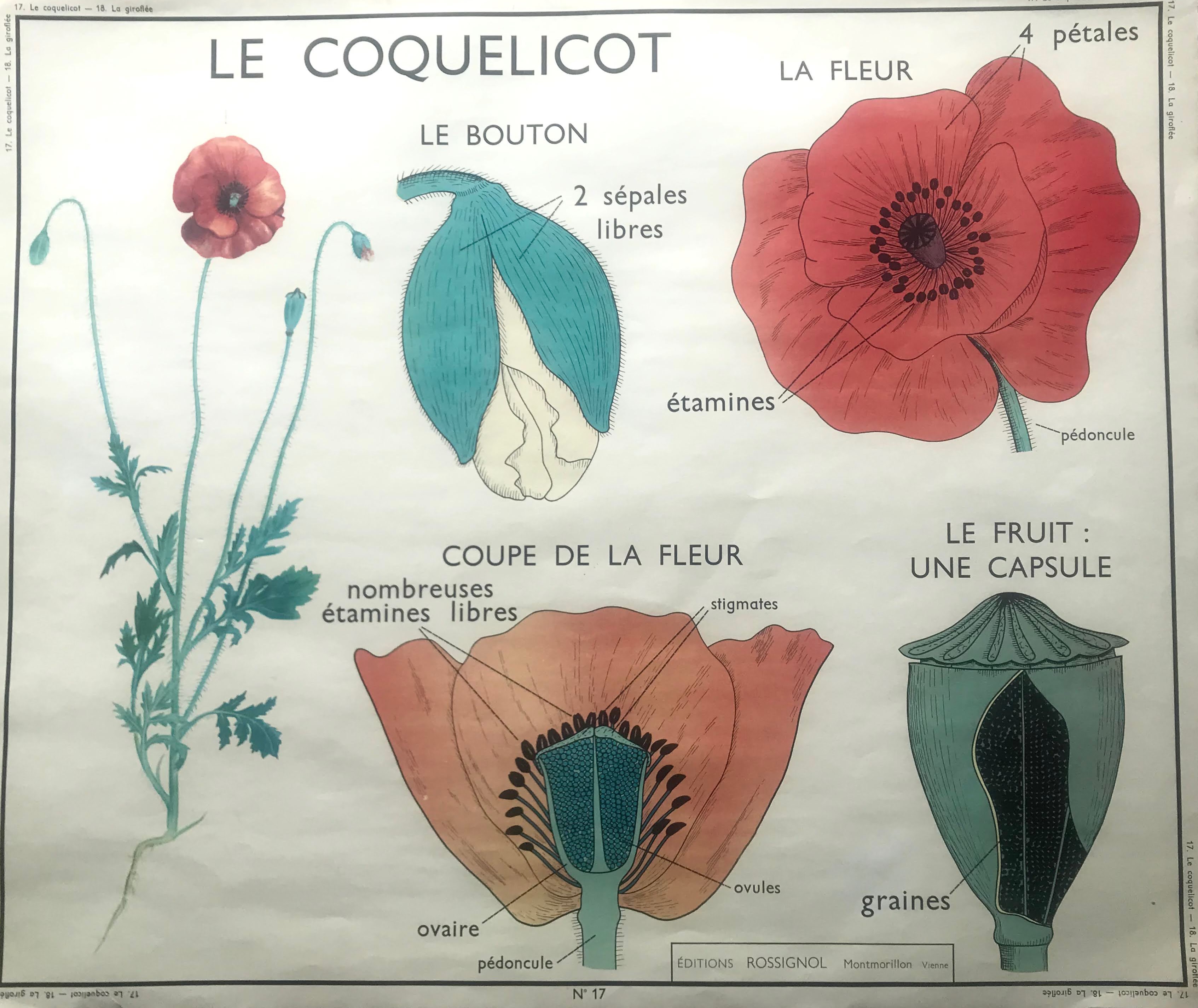 But what if that whole "Bloom where you're planted" thing is wrong? The flowers, wings and dark nights you may find along your path toward bliss.

Not depicted for some reason in this French classroom poster: wings.

You know that “Bloom where you’re planted” saying? I’m calling bullshit on that. I mean, it’s definitely true some of the time, and I love the metaphor of my life as a lush garden. Sure, I can bloom anywhere. I had a cute card with that saying on it and looked at it fondly throughout my 20s.

But the saying can just as often keep you stuck. And I know a thing or two about being stuck. So how about this instead?: Make like a flower and bloom where you’re planted except in two scenarios:

1. You need to go dormant for a while.

2. You’re a plant with wings and can fly away and bloom wherever you please, such as somewhere better.

My version doesn’t work as well embroidered on pillows, but I have enough embroidered pillows, which is zero.

I once saw the Momix dance troupe perform Botanica, a colorful show in which dancers act out scenes from nature while wearing poppy and daisy costumes and such, and I’ve kept a note that I read in the program in my head ever since. (Yes, some people read those programs at theater events. Yes, I’m one of them.) The program quotes Maurice Maeterlinck, who won the Nobel Prize for Literature in 1911 and wrote “The Intelligence of Flowers.”

To break through the earth, Maeterlinck wrote, a plant must “invent or invoke wings.” I stopped to reread that phrase a few times and stare at it on the page. Yeah. That soundede about right. Why not? Invent or invoke wings. I myself have been hoping to do both ever since I read that. You invent by your own doing. You invoke by opening yourself up to things beyond you. And then you shoot up out of dirt, which you can only do if you’re a real flower and not a perfectionistically inclined plastic one.

The perfectionist flower isn’t sure if she’ll bloom at the right time or in the right shape or in the right color. She wonders how she’s supposed to unfold and what she’s supposed to do after she blooms. The real flower is open to just seeing what happens. Orange with white stripes? Cool. Red with a yellow center? Nice. Purple ruffles around the edges? Don’t mind if I do. Oh, some bees are coming to pollinate me now? Excellent.

So I’m all for blooming, but I don’t think you have to stick around and bloom forever wherever you happen to find yourself. Maybe you find the soil around you isn’t all that nourishing. Or maybe it’s not your kind of soil. There’s a time and place for “making the best of things,” and it’s probably not supposed to be a permanent condition — that sounds more like a formula for becoming a victim in the story of your life.

if you're feeling unhappy where you are, consider getting yourself some flower wings and see if they'll take you somewhere beyond the dirt. Not that there’s anything wrong with the dirt. In fact, the dirt is a key part of the whole process. It's what gives you nourishment and connects you to the rest of the earth. You need the dirt, because that's where it all starts. Down there, in the dark.

These days, you can't walk around in the world without someone telling you to think happy thoughts and that everything will thus be OK, perhaps even immediately. I've got no problem with happy thoughts. In fact, I rather believe in their power. But these happy thoughts have to come from somewhere real. They can't be fake, or they'll thrive no more than plastic flowers do. Real flowers begin in darkness. Real happiness sometimes begins there too.

So while you might be tempted to rush ahead and dammit bloom already, you do have to be patient. You have to make peace with the going nowhere part; you have to make peace with the dark and your time there. The medieval mystic St. John of the Cross called this type of crisis the "dark night of the soul," and he would know. He was imprisoned by the monks he thought were his friends, and he hauled off and wrote a spiritual masterpiece. Sometimes, of course, it is not just a dark night of the soul, but a dark year (or dark years). Is it sometimes terrible and painful? Yes. I'd never want to make light of how painful it can be, and yet, you know you’re doing something real when the bottom and everything else drops out of your life. If you play your cards right, you may very well experience the Official Darkness of Being.

There's a desolation to these times that never can be fully expressed. It feels like every good thing in your life dies, along with the hope of ever having another good thing. You sit there, sunk deep in the earth and mud, and wondering if you'll ever get back out. You’re not sure which parts of you still need to die and which you will bring back to life.

T.S. Eliot wrote, “I said to my soul, be still, and wait without hope. For hope would be hope for the wrong thing.” I sometimes felt haunted by these lines by Emily Dickinson, too: “There's a certain Slant of light, Winter Afternoons –  That oppresses, like the Heft Of Cathedral Tunes.” While you’re sitting in the dark, you may lose touch with everything except nothing. I did. All I could feel was that oppressive heft, the haunted afternoon light.

During this part of my un-conversion, I was tired and alone. I had to stay there until I had gotten hold of something, and I realize now the thing I had to get back was my own will. The will to live. The will that had gotten broken in me. The one I'd handed over. If you've lost your will or had it broken, no one can get it back for you except yourself. No one. You have to find it without a savior. (Unless your savior is Emily Dickinson’s poetry, obviously. That’s allowed.)

Until I got mine back, any hope I caught—even the Emily Dickinson kind, the kind with feathers—fell through my fingers like a clump of dirt. And hope often is dirt, not some kind of golden nugget. When the Buddha sat through his greatest pain, he put one hand on the earth. So I did that too. My hope came straight from my backyard. From thunderstorms and feeling the grass between my toes. To live, I had to situate myself on the earth—not in a heavenly fantasy, and not in hellish torture. Just in the middle of each moment as it was happening, amidst trees and flowers and cars that run out of gas if you don’t bother to fill them up and birthdays you’d rather not celebrate and rainbows that look like taunts.

It's hard work, being there in the earth. There are no short cuts. If you’re on a path, you have to take all of the steps. (Do not pass woe; do not collect $200.) The temptation is to manifest a fistful of shallow joy and bypass this dark time, to run away from it. But the best move is to sit in the dark long enough to find your own light. It’s dark. It’s hard. It lasts for however long it lasts. Then you’re out.

The light does come back.

Back to the light

William Blake wrote that “we are put on earth a little space, that we may learn to bear the beams of love." That happens too, and we appreciate those beams more when we're seeing them from our most raw, gnawed-down self. And getting down to that core seems to require darkness. Sorry about that.

You may not have a full-on dark night experience. That’s OK, too. Not everyone does. Some people experience a more subtle quietude, like a hibernation or cocooning. However you experience it, you’ll likely go through some darkness if you're changing your entire belief system. Sometimes you have to grope around looking for what’s next, and sometimes you have to sit still and wait for the light. People may give you good advice, or you may read books you find useful, but ultimately, everyone’s experience is different.

What I can tell you is, the most valuable progress I made came from sitting in the dark and letting something good bloom from that shit. It’s the shitty path toward bliss, down in the dirt, manure and all. It’s a real-live painful budding of something that’s intensely particular to you, that only you can put into the world. It’s not all warm and fuzzy or tidy. It’s confusing and isolating and difficult. It’s messy and it’s epic. It’s full of shit. And it’s yours. It’s getting down with the bliss shit. And it might give you wings. Either way, something blooms.