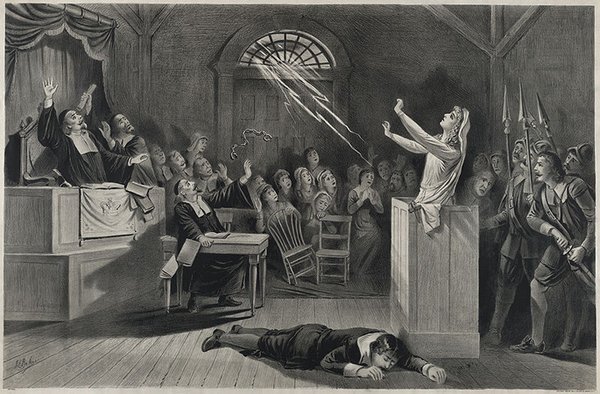 I never dressed up as a witch for Halloween. I was allowed to go trick-or-treating after brief refreshers about how we were only in it for the candy and not the bedevilments. We did not believe witches and devils were anything to be trifled with, and the phrase “all in good fun” wasn’t known to us.

Nor was it known to the Puritans, our philosophical forbearers. Although 200 years separated us – dramatic centuries that brought advancements such as Laffy Taffy and sewing machines – I had a lot in common with those early Americans. I believed in witchcraft just like they did, for one thing. I just didn’t go around having people killed when I suspected they might be dabbling with it.

They did, though. You’ve probably heard the news by now that in 1691-1692 in Salem, Massachusetts, 100-plus people were accused of witchcraft and thrown in jail. Chained up, to be precise. Many of them were put on trial and were most definitely not presumed innocent. Nineteen were killed after being convicted.

I went to Salem for the first time this summer and read A Delusion of Satan by Frances Hill leading up to the visit. (Who doesn’t love a little thematic road trip reading?) This fall, it seems witches are all the rage. The New Yorker recently ran an article about Salem by Pulitzer Prize winner Stacy Schiff, who has a new book on the topic; Witches of America by Alex Mar came out a couple of days ago, too. They’re both on my reading list.

In her book, Frances Hill digs into not only the historical details but also the psychology at work. “In Salem Village,” she writes, “young women were as rigidly controlled, as powerless, and as dissatisfied as perhaps they have ever been anywhere. In the backwaters of New England, the exercise of the private will was regarded as inherently evil…. Their human urges to express their emotions, fulfill their desires, exercise personal will, and exert control over others were pushed out of sight…”

My life in Iowa wasn’t so stark – we had an excellent iron-on T-shirt shop at the local mall, for one thing – but my ideals for girlish behavior weren’t so far off. As I read Hill’s book, I couldn’t help but think about what parts of that Puritan mindset I inherited as part of my Midwestern evangelical childhood. 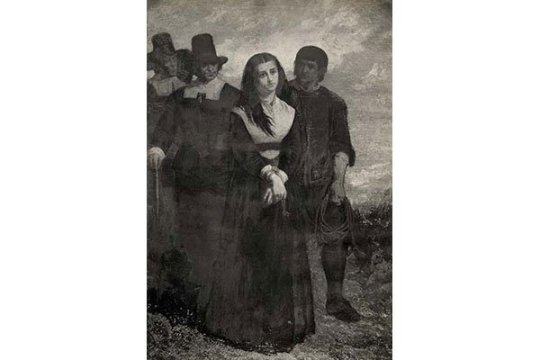 1690s: A bunch of girls started having fits. They became tormented and afflicted, in the parlance of the day. Specifically, they screamed, barked and choked. Their bodies contorted into impossible-seeming poses. And what did the Puritans suppose caused those fits? Pacts with the devil, duh. Witchery. Evil-doing and cavorting with animal spirits. The girls would claim a witch was hitting or pinching them, and marks would appear. Frances Hill points out that although girls had no power in that setting, the entire town paid attention when they had those fits. Their affliction gave them “complete power over parents, caregivers, and everyone else within range,” she writes.

1690s: At the early stages of the hysteria, the reverend’s female slave, Tituba, baked a “witch cake” using urine from a couple of the girls having fits. The idea was that if a dog ate it and also had fits, evil was indeed afoot. The reverend didn’t approve (also didn’t want to eat it, I guess) and accused everyone involved of witchery.

1690s: The Puritans believed in a pitiless God and had no sympathy for anyone who didn’t conform to their standards. Children were no exception. Neither were Quakers, whom they not infrequently whipped and hanged. They viewed people as either godly or devilish, and punishment for acting like the latter was supposed to be humiliating. Was a punishment shameful? “Good one!” they would say. Was an admonishment terrifying? “Perf!” they would say, “just the way we like it!”

1690s: Like others who lived that era, the Puritans drank ale and hard cider with their meals.

1970s -1980s: Ever hear of avoiding the appearance of evil, Puritans? We never drank any alcoholic beverages.

1690s: Puritans often blamed bad behavior and bad luck on the devil’s work. If a cow became ill, they might suspect that a woman who had paid a recent visit to borrow a farm tool had really come by to cast a spell on their cow. 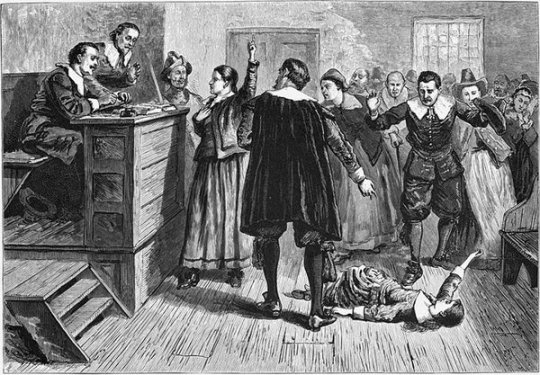 1690s: Their best entertainment was at the Meeting House.

1690s: Wardrobe was deemed relevant in testimony at witch court. The devil was said to wear a black hat when signing pacts with the witches, causing some decades later to notice that so did the reverend. And if one of the accusers knew what one of the accused was wearing that day before she appeared in court, it was decided that the accused witch had obviously visited that girl as a specter earlier that day.

1970s -1980s: My wardrobe was also questioned, especially when I wore gauchos to the roller skating rink.

1690s: Some of the women confessed, likely thinking they would be spared or would at least find some reprieve from the pressures of witch court. Tituba, the reverend’s indentured servant, claimed that she’d been flying around on a broom and meeting other witches in the woods.

1970s -1980s: I once attended a slumber party where one of the girls first suggested we get out an Ouija board and then that we play “light as a feather.” I don’t think I shouted “Get thee behind me, Satan!” at her, but I might have come close. And that was the end of my slumber party career until a preacher’s daughter became my best friend.

1690s: Sunday was the Puritans’ only break from chores, and they spent three hours at church in the morning, two in the afternoon, and then went home for more Bible reading and prayer. (In 1656, a man returned home to Boston after three years at sea and kissed his wife in public. It was Sunday, so he was convicted of “lewd and unseemly” behavior and spent two hours in the stocks.)

1970s -1980s: I was subjected to golf being played on the television on Sunday afternoons between church services and opted instead to sit on porch and listen to the grass grow in person, as was the custom of girls in the pioneer books I read.

1690s: Puritans were less austere when it came to vittles as you might think and enjoyed mixing sweet and savory when they had the chance – for example, eating venison with maple syrup.

1970s -1980s: I was once accused of being stuck-up and had to ask my older brother what it meant. Honestly, I was just scared out of my mind that I might say the wrong thing.

1690s: Salem inhabitants never met some ergot they didn’t like. A theory surfaced in the 1970s that the Salem fits were caused by grains tainted with ergot fungus. It doesn’t seem likely at this point, but it’s a worthy theory. And who knows – maybe it started that way? And then the witchcraft lore and human nature took over? 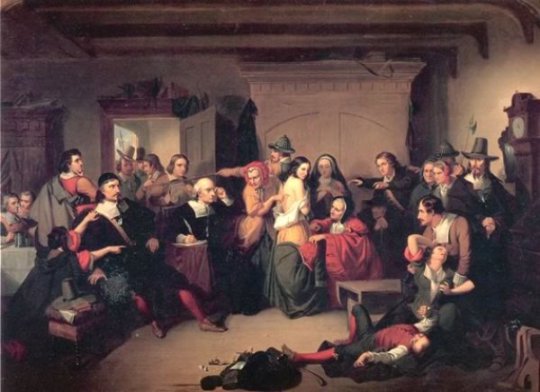 If you visit Salem today, you’ll find stores on every corner named with uncomfortably glib witch references, but you can also find two houses from the era still standing. One is the homestead on the outskirts of town where Rebecca Nurse nurse lived before she was hanged for witchcraft; the other is a foreboding-looking house in the middle of town where one of the judges lived. Many of the exhibits throughout his house are about witchcraft and seem almost instructional.

It’s all so strange. But all so familiar. Here’s what I think: If you really want to know why the Salem witch trials happened, take a look inside yourself, assuming you are a human person. Have you ever had a moment of wanting to take control when you had none? To place blame somewhere convenient? Or maybe to testify in court that you fly around on a broom and plot with other witches in the woods? Congratulations, you could have been a player in the witch trials!

Another historical site you can visit in Salem is the cemetery where one of the men killed in 1692 was pressed to death by stones. That’s what the weight of judgment does – it presses the breath right out of you. Sometimes this is a metaphor; sometimes it isn’t. More than anything, it’s that Puritanical judgment that I inherited. I learned to hold a witch trial for myself with little cause, to hold myself in contempt. It’s a wonder I didn’t choke on all that Halloween candy.