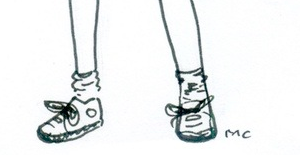 Is that a witness on your T-shirt, or are you just unhappy and judgmental upon seeing me? 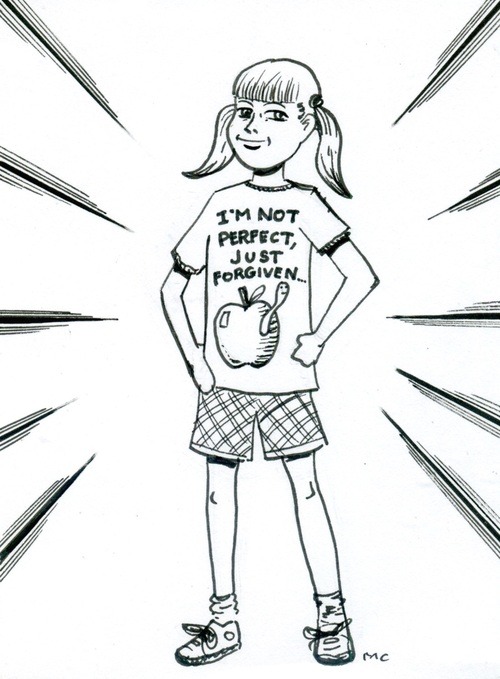 But what I’m really here to talk to you about today are the Christian T-shirts I wore as a kid.

T-shirt #1. Yellow T-shirt with black lettering I wore as a six-year-old: “I’m not perfect, just forgiven” beside a red apple with one bite taken out of it and a friendly worm squirming its way out. Take that, Eve and every other woman in the world!

T-shirt #2. Red T-shirt with black lettering I wore as a high school student: Cryptically asks in large letters, “Whose Task?” Refers to the need to take responsibility for all of the people in the world who need to be saved and go save them already. Procured at summer missionary camp, where we discussed such matters every day.

1. Did you really wear those T-shirts?

Yes, although I only have photographic evidence of the “Whose Task” shirt.

2. In the photo of the “Whose Task” shirt, are you sitting on a bale of hay?

Yes. In this photograph, I am sitting on a bale of hay at my grandparent’s farm, alongside my best friend from high school who joined us for a mini-vacation of shucking corn and snapping peas and sitting on hay bales.

3. Were any of these T-shirts ever used in actual incidents of witnessing to non-Christians?

Yes, my mother once pointed at me when I was wearing the “I’m not perfect, just forgiven shirt” as she was witnessing to a neighbor while standing in our front yard. “See her shirt?” she asked the man. She then read the shirt aloud while I stood quietly, a model Christian.

4. Do you miss that shirt with a kitten on it?

Yes, very much. I would pay top dollar for a recreation of that shirt and wear it every day for a month, possibly longer.